The long saphenous vein is the longest superficial vein in man. It arises anterior to the anterior edge of the medial malleolus (first constant anatomical landmark).

It has a linear course in the leg. It ascends vertically, posterior to the medial border of the tibia. It is accompanied by the leg branch of the saphenous nerve. This anatomical relation obviously carries a risk of sensory disorders following stripping.

At the knee, the long saphenous vein travels posteriorly to the lateral femoral condyle (second constant anatomical landmark). It then travels superficially over the medial region of the thigh, remaining parallel to the medial edge of the sartorius muscle.

Two nervous structures accompany the long saphenous vein: the accessory nerve of the medial saphenous nerve and the anterior branch of the medial musculocutaneous nerve.

In the femoral triangle, the long saphenous vein forms an arch as it penetrates into the depth of the thigh. It perforates the cribriform fascia immediately above Allan Burn’s ligament, which actually corresponds to a reinforcement or fold of the cribriform fascia. The arch of the long saphenous vein then opens onto the anterior surface of the femoral vein 4 centimetres below the inguinal ligament (third constant anatomical landmark).

Its most immediate relations at this level are:

The saphenofemoral junction may be in contact with a lymph node situated in its concavity or may be surrounded by 4 groups of lymph nodes: superolateral, superomedial, inferolateral and inferomedial;

The deep external pudendal artery, branch of the femoral artery, often travels through the concavity of the saphenofemoral junction. Exceptionally, in case of high femoral arterial bifurcation, the profunda femoris artery may lie adjacent to the saphenofemoral junction. These two particular features must be taken into account to avoid damaging the artery;

Resection of the saphenofemoral junction is one of the essential procedures of varicose vein surgery. It involves the dissection of several planes:

– the skin,
– the adipose tissue, often composed of thick layers,
– the cribriform fascia, crossed by the long saphenous vein and its tributaries, which actually corresponds to a particular region of the fascia lata. It has the consistency of a thick membrane, except in the saphenous opening where the fascia lata becomes porous and reticular to become the cribriform fascia. Lymph nodes are situated anterior to this fascia.

After resection of the cribriform fascia, the saphenous opening can be seen to be surrounded by the Allan Burns’ falciform ligament. From medial to lateral, this space contains the deep inguinal lymph nodes, the femoral vein which receives the long saphenous vein, and the femoral artery.

Some authors recommend closure of the fascia lata after resection of the saphenofemoral junction in brder to limit the risks of recurrence. This procedure nevertheless remains corttroversial, as it could facilitate the development of lymphatic lesions (postoperative lymphorrhea ). 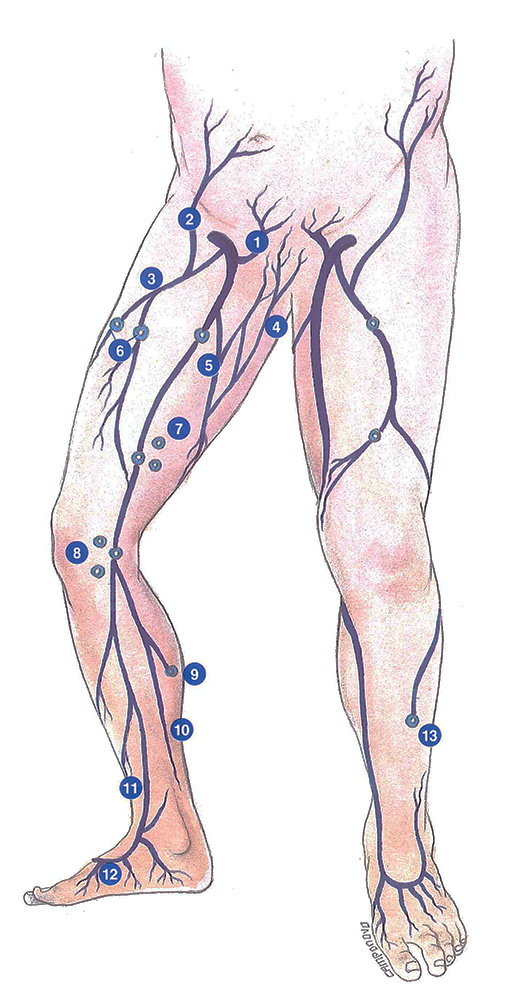 The long saphenous vein (perforating veins are shown by O).