The popliteal fossa, a real venous crossroads, is the site of anastomosis of three superimposed venous planes: the short saphenous vein and its collaterals, which drain the subcutaneous zone: the medial and lateral gastrocnemius veins, which drain the intramuscular zone: and, finally, the popliteal vein, sometimes duplicated by a collateral vessel, which drains blood from the intermuscular zone (from peroneal, anterior tibial, and posterior tibial veins).

From a functional point of view, under physiological conditions, the intramuscular gastrocnemius veins represent a venous reservoir at the center of the “peripheral heart,” corresponding to the calf muscle pump. During muscle contraction, blood is expelled at a very high flow rate to the popliteal vein. During muscle relaxation, or in the case of sudden pressure variations in the popliteal vein (for example. breath-holding effort), the extramuscular portion of the gastrocnemius veins, which travels in the loose connective tissue of the popliteal fossa, dilates and absorbs these pressure rises.

When the gastrocnemius veins are abnormally dilated (Figure 75A), ), they form a larger blood reservoir. In the case of sudden muscle contraction associated with breath-holding effort, the blood from intramuscular gastrocnemius veins is ejected at a high flow rate into the popliteal network (Figure 75B). Deep venous hypertension (breath-holding effort, obstacle to evacuation of blood by the deep venous network) impairs drainage, resulting in a marked rise in popliteal venous pressure. In this example, the short saphenous vein represents an important pathway of evacuation of excess blood in the gastrocnemius veins and therefore constitutes a second “shock absorber”. 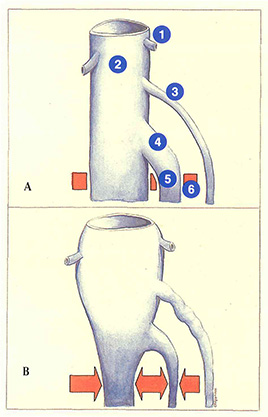 Consequences of gastrocnemius vein dilatation on the popliteal vein.

Ligation of the saphenopopliteal junction associated with stripping will therefore eliminate this excess pressure shock-absorbing mechanism and facilitate the rapid development of a perforating vessel in the popliteal fossa.

These features can lead to two conclusions: 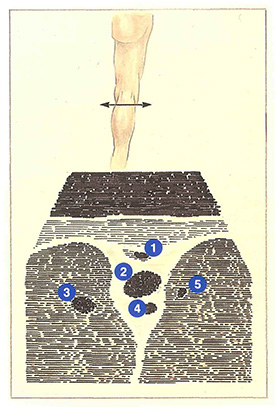