The femoral region is characterized by the presence of one or several perforating veins within the adductor canal. These veins, usually called Dodd’s perforators, connect the long saphenous trunkr or one of its tributaries with the femoral vein. 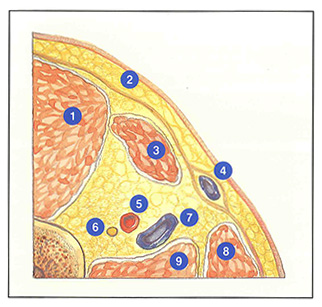 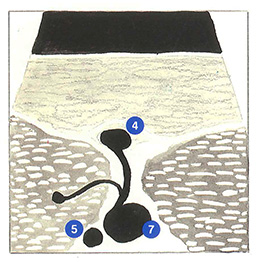 The adductor canal (Figure 61-A), situated in the lower third of the thigh, is delimited anteriorly by the vastus medialis muscle (M. vastus medialis), posteriorly by the tendon of the adductor magnus muscle (M. adductor magnus) and laterally by the aponeurosis of the adductor canal. This aponeurosis is perforated, above, by the deep branch of the accessory saphenous nerve and Dodd’s perforator, and below, by the saphenous nerve and the great anastomotic artery.

The adductor canal contains, from its base towards the surface, the saphenous nerve and the accessory saphenous nerve, the femoral artery, and the femoral vein which forms a half spiral around the femoral artery.
On transverse ultrasound sections (Figure 61-B), the long saphenous vein, in its aponeurotic “sheath”, travels along the posterior margin of the sartorius muscle (M. sartorius). Dodd’s perforator may be detected at this level when its diameter exceeds 2 mm.

This perforating vein has a variable origin: long saphenous or accessory trunk, a tributary, or sometimes even a subaponeurotic collateral channel.
In the first case, it arises from the deep surface of the long saphenous vein at the junction of the middle and lower thirds of the thigh. It is 4 to 8 cm long and travels obliquely upwards, medially and anteriorly. It is accompanied by an arterial branch and a deep sensory branch of the accessory saphenous nerve. It finally drains into the medial surface of the femoral vein.

This perforating vein may be unique or multibranched by receiving indirect branches derived from the adjacent muscle. The adductor canal sometimes contains a real group of perforating veins (as many as six), but only one or two of them will be demonstrated on ultrasonography.

A decisive, although little known, factor in the pathogenesis of recurrence consists of the possibility of duplication of the saphenous trunk in two superimposed planes (Figure 61-C). On ultrasonography, the dilated long saphenous trunk, which can be followed from the groin, appears te, leave its aponeurotic “sheath”‘ mid-thigh (Figure 61-D). This actually corresponds to a supra-aponeurotic duplication into which the guidewire will be introduced during stripping. The true long saphenous trunk may not be visualized on ultrasonography when it is less than 2 mm in diameter. Failure to recognize this long saphenous trunk which has not left its aponeurotic “sheath”, constitutes a frequent factor of poststripping recurrence, especially as this vein may receive Dodd’s perforator.

In other cases, the long saphenous trunk is duplicated in the same plane (Figure 61-E) and Dodd’s perforator then divides forming a lambda appearance (Figure 61-F).

Anatomical variants and intimate relations with arteries and nerves account for the difficulty of surgical treatment of perforating veins of the femoral region.