In addition to the anatomical variants of its junction with the femoral vein, the long saphenous vein is also characterized by the complexity of its accessory and satellite networks.

It is essential to remember that a dilated long saphenous vein, with reflux at the saphenofemoral junction and upper third of the thigh, may be associated with a small (2 mm), competent trunk in the mid-thigh. This vessel, sometimes not detected on ultrasonography, preserves its normal anatomical course along the aponeurosis in the lower third of the thigh, as the reflux persists in an anterior or posterior accessory saphenous yein (Figure 66 left), or an accessory vein parallel to the main trunk (Figure 66 right).

When the accessory vein is superimposed on the main trunk, it may be mistaken for the main trunk by the ultrasonographer or surgeon and may consequently persist after stripping and induce recurrence. 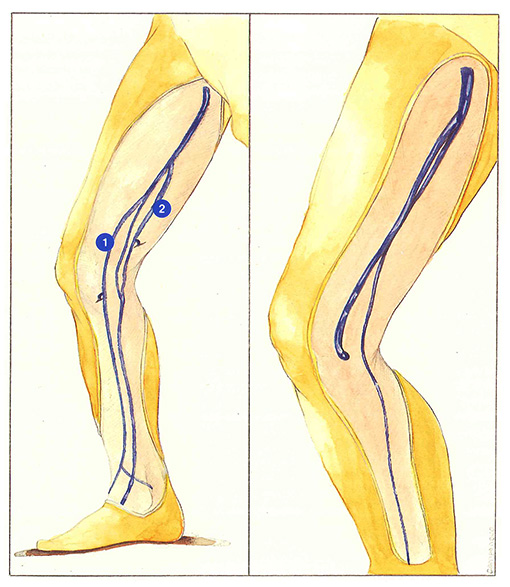 It is sometimes continuous with the great anastomotic vein in the adductor canal, via which it directly enters the femoral vein. This arrangement can lead to false passage of a stripper or endoscope when it is introduced from below.

Finally, the accessory vein can travel independently of the saphenous vein as far as the groin where it opens directly into the femoral vein.