Two types of perforating vein can be distinguished below the popliteal fossa:

Functionally, direct perforating veins not related to intramuscular veins constitute a safety valve in the case of positional obstruction to superficial blood flow in the saphenous networks (stretching and compression by crossing the legs). The most important of these perforating veins are Boyd’s perforators and Cockett’s perforators. In contrast, in the case of hypertension in the deep venous network, their short, direct course facilitates the development of skin lesions at this level. 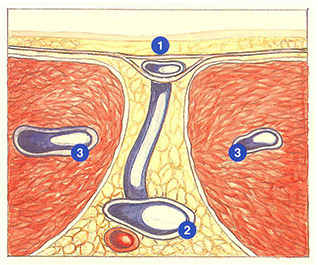 When the intramuscular venous network is the site of hypertension (dilatation or incompetence of gastrocnemius veins, insufficient muscle pump, obstruction to blood flow), transgastrocnemius intersaphenous connections can ensure diffusion of reflux to saphenous trunks, intersaphenous arches, and/or collaterals.

The short saphenous vein is also usually suprafascial in this zone, which explains why, in contrast with the long saphenous vein, the short saphenous vein can present a greater caliber than its junction with the deep system. Ultrasound investigation of the trunk must therefore be just as detailed as that of the saphenopopliteal junction and proximal reflux. Precise mapping of intersaphenous arches and gastrocnemius perforating veins is absolutely essential. The absence of these data can account for certain failures of isolated saphenopopliteal junction ligation. 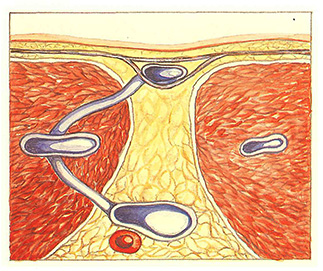 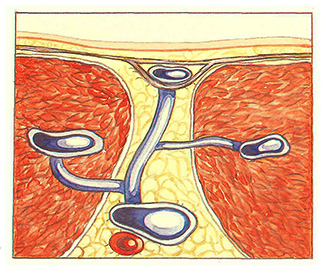 These perforating veins possess two or three valves situated at their origin and in the zone of their transfascial passage. 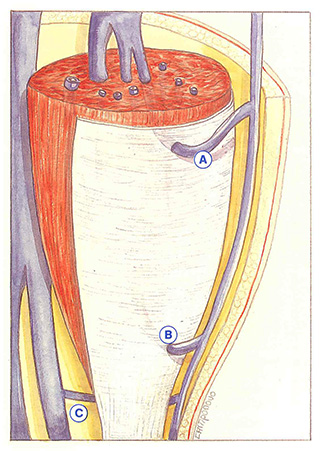 Various types of perforating veins in the leg (general diagram)

Thomson H. The surgical anatomy of the superficial and perforating veins of the lower limb. Annals of the Royal College of Surgeons, 1979; 61: 197-205.