The tributaries of the saphenofemoral junction can constitute anatomical traps:

The tributaries which ensure the cutaneous drainage of regions situated above the inguinal skin crease include, from lateral to medial:

In 75% of cases, the tributaries drain directly into the arch of the long saphenous vein. However, apart from this classical configuration, three other modes of anastomosis may be encountered: (Figure 23)

Three modes of unusual anastomosis of tributaries of cutaneous drainage

When the tributary drains directly into the femoral vein, the trap most frequently encountered is that of an abdominal subcutaneous vein which drains laterally into this vein. This difficulty can be overcome by performing a sufficiently large surgical dissection.

More rarely (1 %), the tributary drains into the femoral vein above the arch of the long saphenous vein (Figure 24), in which case it is more difficult to identify. However, recurrence via this vessel can only occur when there is a communication with the intrapelvic system or in the presence of hypertension of the iliofemoral system. 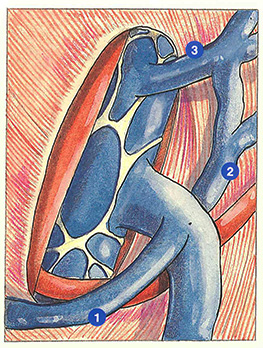 Direct drainage into the femoral vein

It may therefore pass unnoticed, as it is masked by the arch of the long saphenous vein. Recurrences following resection of the saphenofemoral junction may occur when the ligation is not performed flush to the femoral vein, at the site of the last ostial valve.