Tributaries and accessory saphenous veins differ in terms of the structure of their wall and their topography. Tributaries have a fragile wall, frequently associated with a tortuous, varicose appearance, with thin-walled ectatic zones interrupted by thick-walled zones. In contrast, accessory saphenous veins possess a more solid, reinforced media and can consequently be considered to have a “saphenous” type of wall.

Topographically, accessory saphenous veins remain relatively linear and run close to the main saphenous trunk. In contrast, tributaries are often situated at a distance from saphenous trunks and may travel around the thigh, corresponding to a scarf distribution (Figure 67-2).

Tributaries of the long and accessory saphenous veins are classified as proximal (Figure 67) and distal (Figure 69). ‘Veins which,’ although belonging to the saphenous system, do not anastomose directly with the saphenous trunks, but which drain into perforating veins of the thigh or the leg, are called suspend tributaries. (Figure 68). 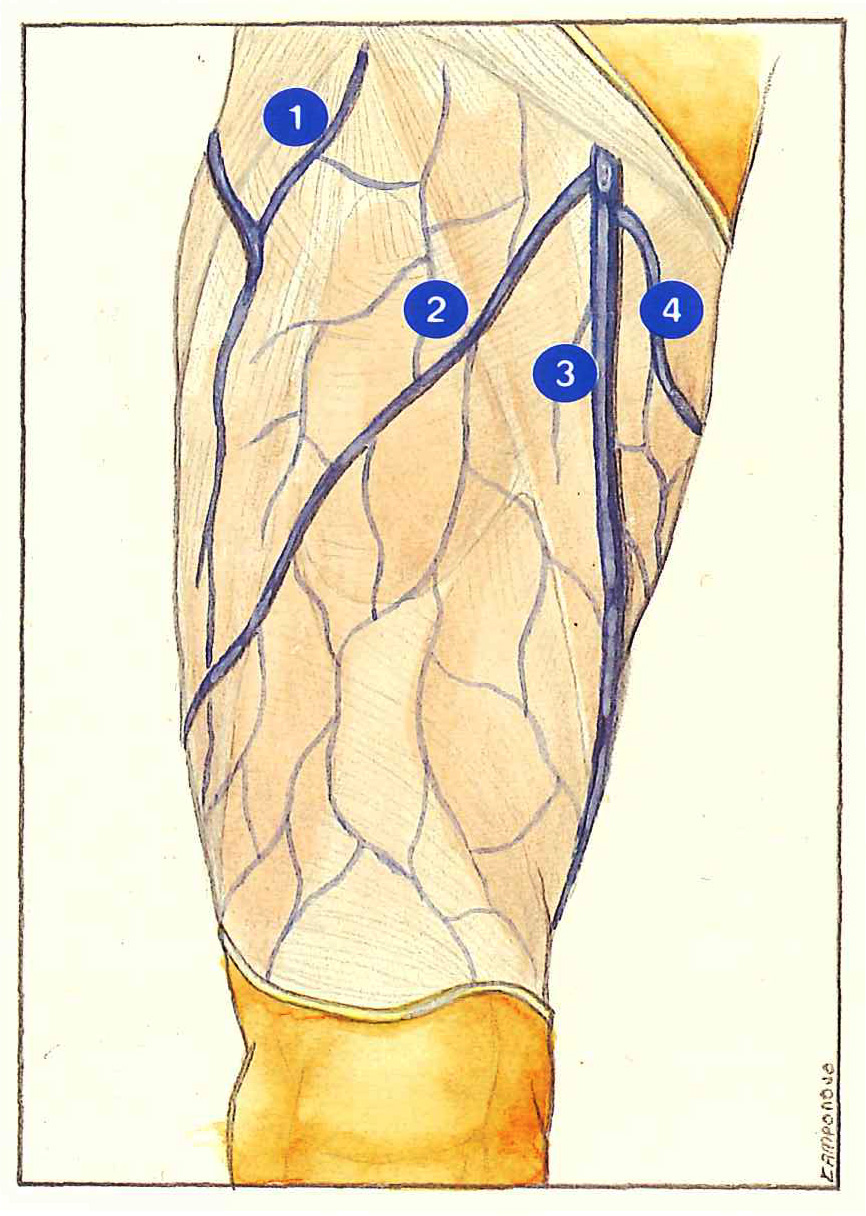 Posterior tributaries of the thigh can drain into perineal veins or into the short saphenous network in the popliteal fossa, in which case they become Giacomini veins (Figure 67-4).

Suspended tributaries (Figure 68) are sometimes the site of isolated reflux from perforating veins of the thigh or leg, while the saphenous network remains perfectly competent. Incompetence of these perforating veins can be secondary to local trauma, to their anastomosis into an incompetent segment of a deep vein (sequelae of thrombosis), or in the presence of positional excess pressure in the deep veins.

The existence of these veins constitutes a subject of disagreement between Anglo-Saxon authors, who believe that varicose disease starts with distal reflux from a perforating vein supplying a suspended tributary, and Southern European authors who, in contrast, consider that proximal reflux initiates the formation of distal varicose veins with contiguous spread of reflux from above downwards.

This divergent view of the role of proximal and distal reflux is due to the different criteria used to describe reflux and to assess its pathogenic nature. These differences are tending to fade at the present time, as the hemodynamic and functional approach to venous anatomy demonstrates that these two mechanisms can actually coexist.

In the leg (Figure 69), anterior tributaries are often visible, even when they are fine and competent, as they cross the tibial crest and are therefore very superficial in a region with thin subcutaneous tissue.

In the upper third of the leg, posterior tributaries of the calf form a sort of plexus which receives medial gastrocnemius perforating veins.