Home » An essential concept: the superimposition of three venous planes

The veins of the lower limbs form a dense network converging from the venous capillary towards the inferior vena cava.

Depending on whether their diameter is less than or greater than 2 mm, veins are usually classified as draining veins, from cutaneous, fatty, or muscular territory, or collecting veins (saphenous trunks, tibial, peroneal, popliteal, femoral, and sural veins).

Very intimate connections are established between the venous networks of the dermis, subcutaneous tissue (fat), and muscle. For example, the horizontal plexus of the deep dermis communicates with perforating vessels derived from subcutaneous fat and underlying
muscle (Figure 44). 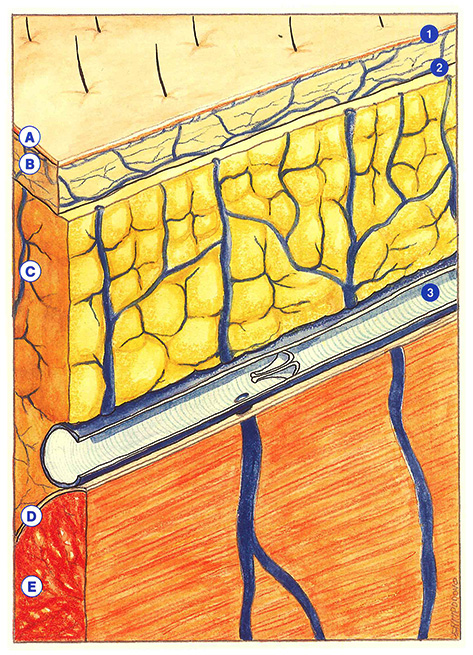 The superficial veins of the lower limbs can be defined according to the depth of their anatomical location. Three superimposed planes can be distinguished, corresponding to the three venous networks: dermal, subdermal, and subaponeurotic. As we will see, this classification has a certain practical value to account for a number of clinical findings.

Dermal veins are organized into two horizontal plexuses, a superficial so-called subpapillary plexus, and a deep plexus. These two structures are connected to each other and both communicate with the subdermal venous network.

Once again, according to their diameter, these vessels are classified as microvenules (less than 0.01 mm) or venules (between 0.01 to 0.1 mm in diameter). Dermal venules become visible through the epidermis when they exceed 0.1 mm in diameter. When dilated, they form what Von Graf, in 1807, called telangiectasias. It is interesting to note, in this context, that only ectatic venules with a diameter greater than 0.3 mm are accessible to sclerosing injections. However, the sclerosing agent can reach smaller-caliber venules secondarily.

The fat lobules in the subdermis are delimited by bands of collagen fibers derived from the dermis, which form interlobular septa, corresponding to real tension bands which reduce cutaneous mobility by attaching to muscular aponeuroses. Curri perfectly demonstrated that subdermal venules and veins do not penetrate into the fatty lobules, but travel along the septa.

An increase in the volume of adipocytes can therefore be considered to result in compression of interlobular veins. Their drainage function is consequently limited, which obviously accentuates the varicosities. This illustrates the intimate relationship between the subdermal adipose tissue and the veno’lymphatic circulation.

This network is composed of intramuscular veins (sural and profunda femoris veins) and intermuscular veins (tibial, peroneal, popliteal, and femoral veins). Both of these systems are connected to dermal and subdermal networks by direct or indirect perforating veins, often with multiple branches.

This anatomical arrangement, with its wealth of interconnections, helps to explain the pathogenesis of intradermal varicosities, which correspond to permanent dilatations of dermal venules.

In the light of recent techniques used to study the cutaneous microcirculation (20 MHz ultrasonography, microphlebography, laserDoppler, skin capillaroscopy, biopsies), each cutaneous region appears to be an independent anatomical and functional entity.

Several mechanisms of formation can be attributed to varicosities according to their shape, color, conditions of appearance, and aggravating factors.

They are usually related to excess pressure in a subdermal or intramuscular venous trunk. When the excess pressure is secondary to more proximal reflux, varicosities have a fan-shaped appearance, converging upwards (Figure 45-A). In contrast, when the reflux is situated more distally, the fan-shaped varicosities converge downwards (Figure 45-B). Another mechanism is that of opening of arteriovenous shunts during pregnancy or hormonal imbalance. In this case, large sheets of very dense and bright red angiomatous varicosities are observed (Figure 45-C).

The last mechanism involved is an increased volume of subdermal adipocytes. Cellulitis, constituting true localized lipodystrophy of the subcutaneous connective tissue, impairs drainage of the dermal territories, resulting in disseminated varicosities, not centered on a feeding vein (Figure 45-D).