Under physiological conditions, 90% of venous blood returns to the heart via deep veins and 10% via superficial veins. This venous return is ensured by several pumps, the most important being diaphragmatic inspiration for the femorocaval system and the valvulomuscular pump in the calf.

A continuously modified equilibrium is established at rest between the forces which generate venous return and those which oppose venous return (Figure 50). The most constant factor opposing venous return is hydrostatic pressure related to gravity. Inversely, certain forces, such as raisïng of the diaphragm or the cardiac pump, “aspirate” venous blood, while others, such as residual blood pressure, “push” venous blood.

Overall, venous blood flow varies according to the phase of respiration (start or end of inspiration, réspiratory pause, etc), posture, and the presence of external compression (constriction by clothing, crossing of legs, etc).

The progression of venous blood only obeys a single law: the pressure gradient, which can change at any time according to the diameter of the vessel, the position of the limb, the phase of the respiratory cycle, etc.

At rest, in the middle of expiration, blood flow is maximal in the deep venous network. Blood is aspirated from superficial veins towards the deep network via “perforating” veins and valves are opened.
Venous blood flow decreases during a respiratory pause. Depending on posture or during effort with apnea even slight, the pressure gradient is reduced or inverted and the valves close. A new steadv state is achieved soon after, during which the valves float freely in the venous lumen. The blood then circulates in both directions via perforating veins. 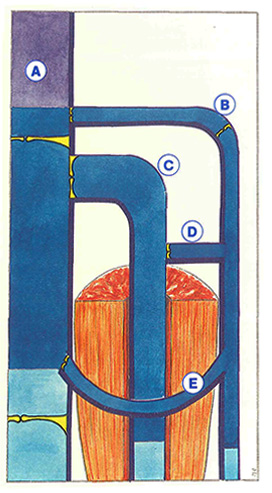 The venous system at rest.

Only sudden inversions of the pressure gradient induce occlusion of the valves, as is observed during muscle contraction (Figure 51) : the contracted muscle compresses the intramuscular veins (for example, the sural veins ) and intermuscular veins (for example, the popliteal vein ). The blood in deep veins is propelled towards the heart at a high flow rate. At the same time, it is aspirated from the superficial network via perforating veins. 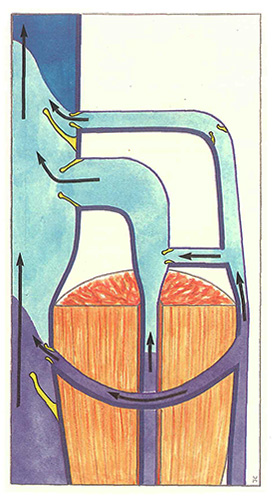 When the muscle relaxes (Figure 52), the sudden dilatation of veins is accompanied by brief reflux which induces closure of the valves, resulting in the conditions illustrated in figure 50. 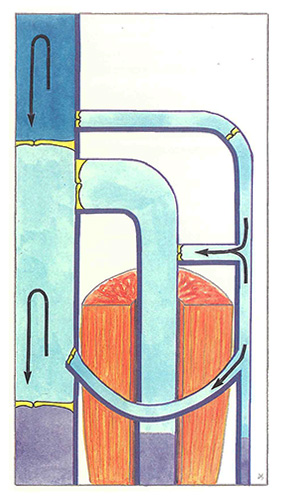 In the case of superficial venous insufficiency with for example, a lesion of the ostial valve of the short saphenous vein (Figure 53), muscle contraction drives blood towwards the heart via the deep venous network. Consequently, superficial blood is aspirated towards the deep vessels via perforating veins and the saphenopopliteal junction. Consequently, no reflux is possible during muscle contraction in the absence of any lesion of the deep veins. 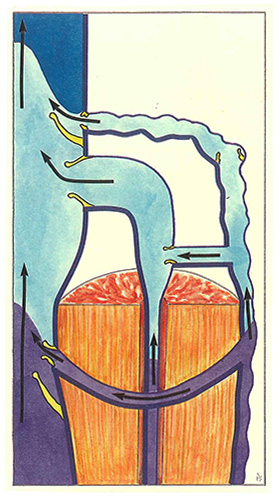 When the muscle relaxes (Figure 54), reflux occurs from the popliteal vein towards the short saphenous arch with reentry of the regurgitated blood volume distal to the deep venous network. This results in a real closed circulatory circuit, ie, a venovenous shunt between the deep vein and the superficial vein. 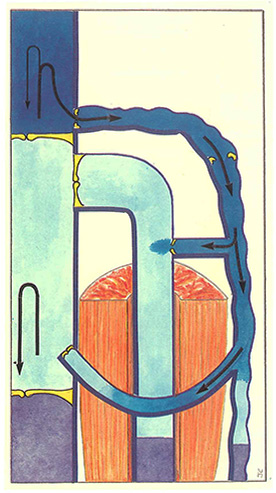 Several elements should now be emphasized:

Before discussing these hemodynamic criteria, we must demonstrate that venous reflux does not only occur during muscle relaxation, but can also be observed during muscle contraction.

When there is an obstruction in the deep veins, muscle contraction induces excess pressure in this vessel (Figure 55), which “forces” the valves of the perforating vein and, consequently, induces superficial reflux. The site of reflux obviously depends on the site of the obstruction. The blood contained in other parts of the superficial network will be aspirated towards the patent deep venous trunk.

Increased pressure in the deep venous network can be due to a mechanical obstacle (total or partial thrombosis, external compression), but also to a hemodynamic “obstacle” (contraction of the calf during effort with apnea as observed in ‘weight lifters’, for example). External compression may be due to cysts or tumors, but also to congenital abnormalities: abnormal course of a deep vein which travels around rather than along a muscle ten-‘ don and which is consequently compressed with each muscle contraction. Finally, repeated efforts in nonphysiological positions are also responsible for external compression. 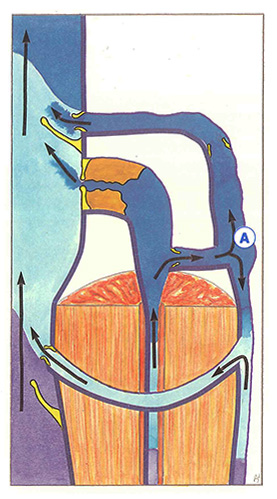 During muscle relaxation (Figure 56),depending on the site of the obstacle, and whether it is partial or complete, as well as the associated presence of a deep valvular lesion, reflux via the perforating vein will also be observed under the same conditions as ostial reflux illustrated in figure 54. This reflux, sometimes isolated in the beginning, gradually extends proximally (saphenous arches) and distally. 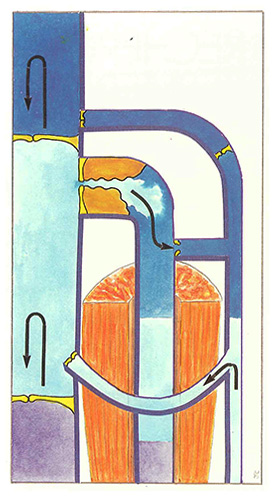 These forms of reflux secondary to incompetent perforating veins during muscle contraction and relaxation are accompanied by a “blowout” phenomenon. This has led to the idea that a varicose vein can develop from a distal perforating vein. At advanced stages, these perforating veins, especially Cockett’s veins, predispose to the development of skin lesions.

Venous hemodynamics is a complex discipline which must systematically accompany any anatomical description.

It must be remembered that not all forms of blood reflux are pathogenic, ie, associated with the development of varicose veins (defined as dilated, tortuous veins associated with reflux), functional signs, or trophic disorders.

Physiologically, the vein continuously adapts to pressure variations either by means of a relay system of the various pumps, or by modifying its diameter. The venous blood circulation is not uniform: it varies from one territory to another, progressing in sudden jolts, and may even be transiently inverted.

Under pathological conditions, reflux must be characterized by:

Most dilated perforating veins are reentry perforating veins and not incompetent perforating veins. Dynamic tests are essential to distinguish between these two forms. These dynamic tests also evaluate parietal function (contraction capacity of the venous wall). Quantification of reflux is not limited to simple determination of its duration, but must also include evaluation of the development of the underlying varicose network as well as qualitative assessment of reentries and the calf muscle pump.

Bjordal R. Circulation patterns in incompetent perforating veins in the calf and in the saphenes system in primary varicose veins. Acta Chir Scand 1972, 138: 251.