This is a particular case of association of an accessory saphenous vein with the main saphenous trunk.

It constitutes a surgical trap when the first arch exposed drains directly into a large underlying long saphenous vein, which may be confused with the femoral vein.

The surgeon may then be faced with two situations when looking for the arch of the saphenous vein.

In the first case, he identifies a “first arch” which simulates the arch of the long saphenous vein, particularly by the presence of one or two tributaries and the fact that it drains into a larger underlying vein, tending to suggest the femoral vein (Figure 20).

In reality, this latter vein corresponds to the real long saphenous vein which receives other tributaries and which subsequently drains into the underlying femoral vein.

This first variant has the appearance of three superimposed veins “spread out” in a single plane. This variant fully justifies a more extensive investigation than simple visualization of the “femoral cone”, combined with dissection of the lateral surfaces of the femoral vein. 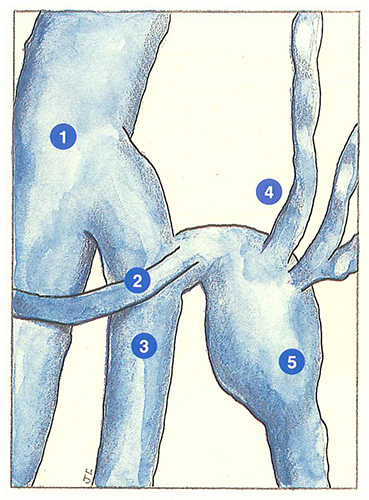 The second variant creates a real H appearance (Figures 21 and 22).

The risk is even greater when the termination of the accessory saphenous vein is situated two to three fingerbreadths bélow the arch of the long saphenous vein, in which case it may not be visualized by a surgeon who bas not performed a sufficiently large incision.

Once again, preoperative mapping is able to identify the existence of an H-shaped junction. 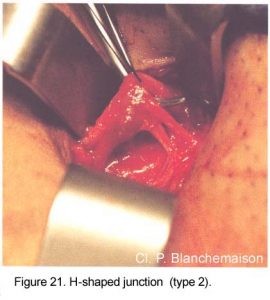 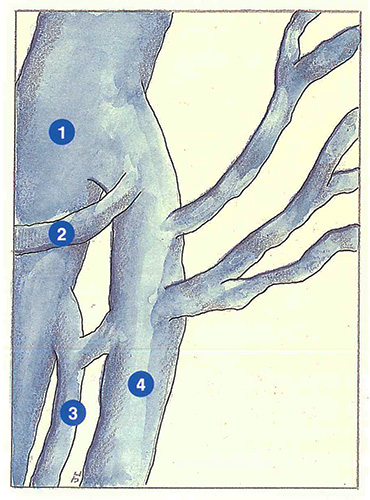